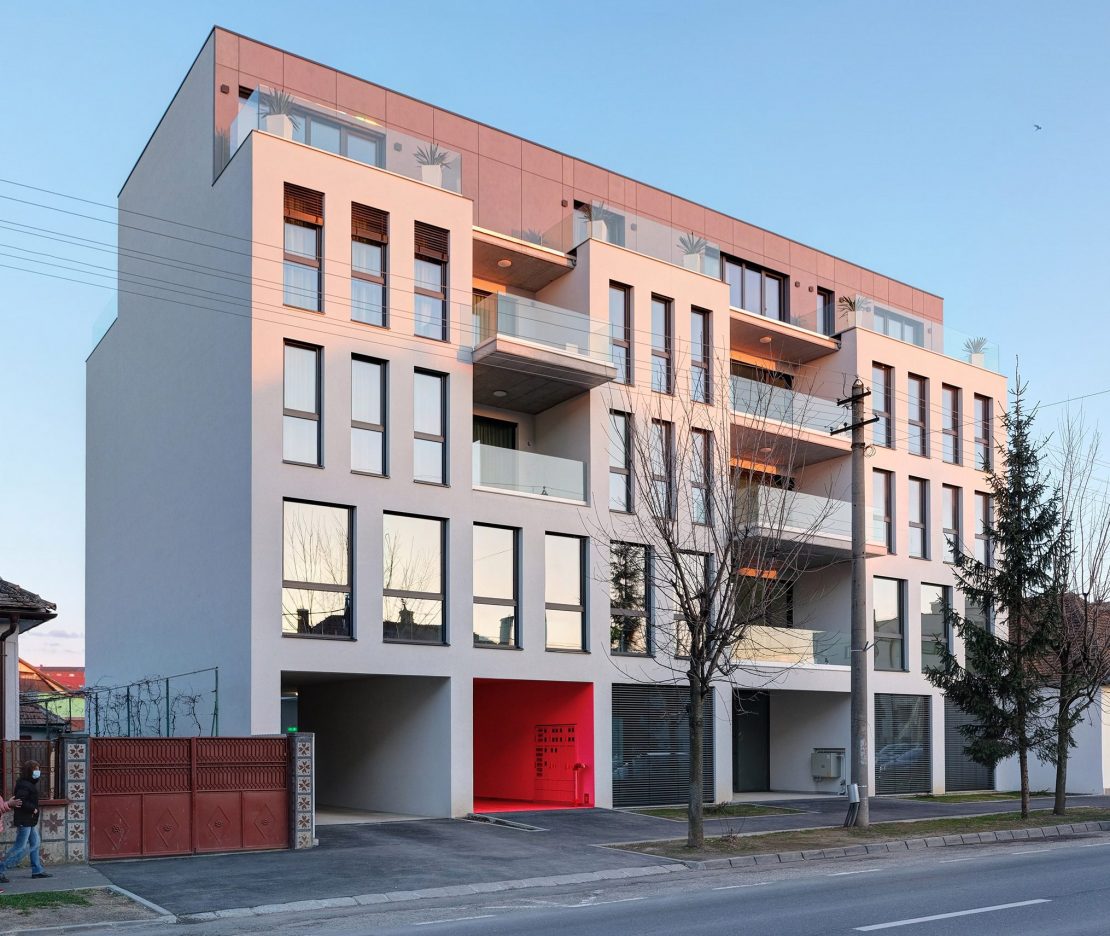 Artist competition for the design of the entrance on Calea Dumbravii nr. 71

We propose a new contest addressed to the artists for the entrance area in the building made on Calea Dumbrăvii no. 71, in Sibiu. The prize is worth 5,000 euros (gross).

After the experience of the first competition for the building on Calea Dumbrăvii 40, we want to outline the entrance to the second building made by our team. We are looking for proposals that animate the space and contrast with the rest of the building, but at the same time to harmonize with its architecture; we want abstract works that represent a color accent in the building, and concepts that surprise us with emotion.

The area in which the artistic proposal will be integrated has a width of 3.40 m, and the access to the building is detached from the sidewalk of Calea Dumbrăvii street, like an alveolus. The entrance is delimited by two solid walls 8.65 m long, ﬁ niches with white paint: on the right side is included a box with electric meters, a panel for mailboxes and the entrance for the apartment area, and on the opposite side is a wall full white. This access area continues to the green courtyard and the terrace behind the plot.

More details about the contest can be found here.

Following the proposals received, we chose the winning work of Mrs. Sabaciag Catrinel, suggestively entitled “Murmur”. You can see all the entries received below.

Entrance to the building Calea Dumbrăvii 71

A total of 17 works were entered in the competition and were further admitted to the judging process. We appreciated the variety of the proposed concepts and, unlike the previous competition, a large part of the proposals consisted of artistic installations.

The criteria that guided the jury in scoring each entry were organised into three categories and each had a different weighting in the final average, as follows:

As a way of working to judge the projects, each member of the jury individually analysed the proposals received and awarded a score to each entry, based on the criteria mentioned. Subsequently, all the participating projects were jointly analysed and discussed, and the first two works were decided. 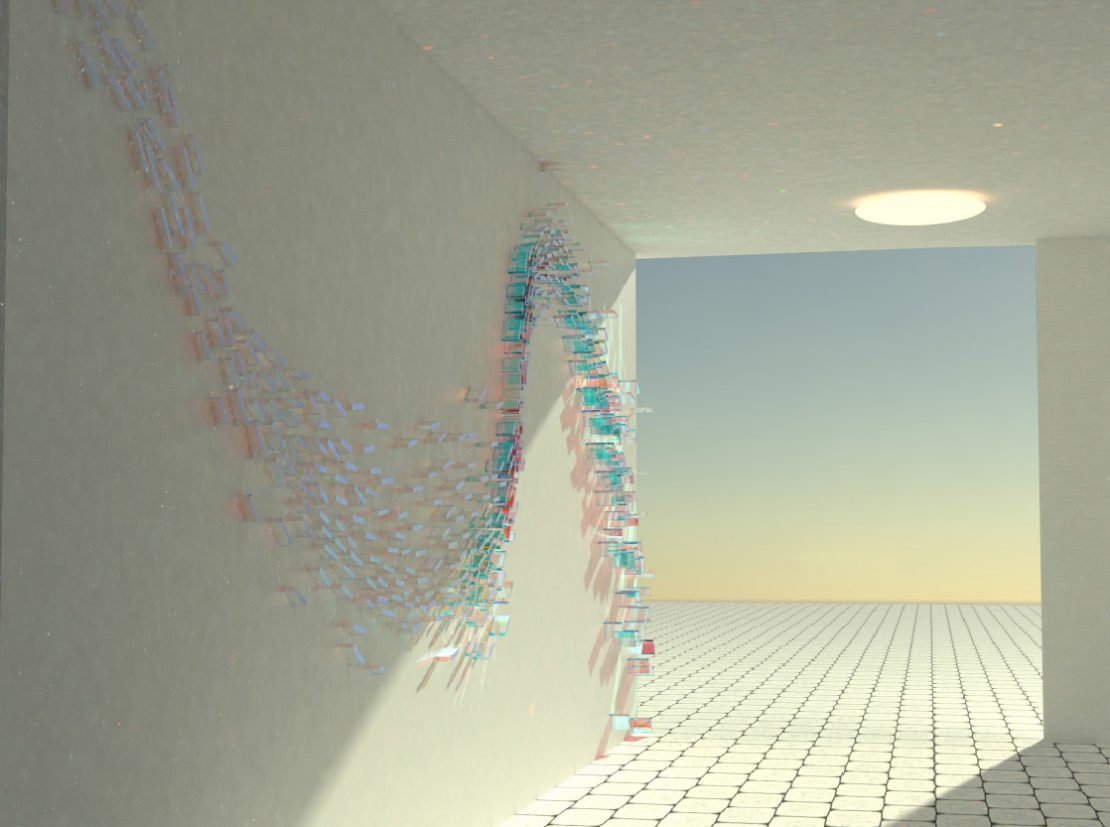 The winning work designated by the jury is ” / MURMUR / ” – author: Catrinel Sabaciag

An installation that uses colour in a very subtle and discreet way, it invites you to walk through the area and discover the play generated by the dichroic material elements arranged on the wall of the entrance, depending on the light and shadows. The fluidity of the composition and the use of body movement, the coherence of the project and the way the artistic concept was built in the context of the entrance were appreciated.

With the installation “Mur-Mur” we want to transform the entrance area of the building on Calea Dumbrăvii no. 71 from a crossing point into a destination in itself.

The destination marks the route of the inhabitants and visitors of the building. The installation is made of dichroic plexiglass pieces arranged in an organic pattern, inspired by the flight of birds in flocks.

The pieces are fixed in 150 cm/300 cm wooden panels. They are thus easy to install on the wall.

The dynamic and fluid nature of the installation invites and guides the viewer into the building. Through the composition of the dichroic plexiglass, depending on the angle from which it is viewed, the work creates a whole spectrum of light, reflections and shadows. Placed in this setting, the installation reinvents the space and creates a particular contrast between the environments, between the geometric architecture of the building that frames it and the eclectic interior, which combines a play of radiant rays and colours. For this reason, the entrance to the building is the ideal space for viewing and experiencing this effect, with the public forced to move to fulfil the functionality of the work. This creates a visually heterogeneous environment in which the viewer becomes a co-creator of the work. At every step, the material generates effects triggered by the movement of the sun that cause recurrent and unpredictable changes of light and colour. This play of light and colour creates a pre-home experience for the inhabitants of the building.

The organic distribution of the pieces is inspired by ‘murmuration’. It refers to the flocking of migratory birds.

Scientists believe that this type of flight is similar to other systems, such as crystal formation, avalanches, metal magnetization, etc.

In such a flight there is no one bird directing the flight, but they fly in unison, protecting the group. Like birds, humans find security within groups. I felt that the building, a symbol of the union of individuals, lends itself to being brought to life by an installation that speaks of the fragile relationship between the individual and the group.

Thanks to the solid fixation of the plexiglass components in the panel, a very resistant material both in terms of hardness and UV resistance, the installation does not require any particular maintenance. It is moisture and UV resistant. In terms of cleaning, it can be done with a simple cleaning cloth (see picture below).

However, optionally, if extra protection of the work is desired, a glass wall can be installed in front of it.

The glass wall will be flush with the pillar at the entrance.

A dichroic material is one that causes visible light to be split into distinct beams of different wavelengths (colours). The original term for dichroic comes from the Greek “dikhroos”.

The kinetic installation proposed in the entrance area was highly appreciated by the jury, being a unique installation that interacts with the viewer, its presence triggering movement.

We believe that such an installation would be much better showcased in a larger and more open space, such as a square.

As the project requires a two-dimensional work, I propose an installation in the form of a kinetic (moving) bas-relief, composed of several stylised abstract elements.

The proposed concept has as its theme connection and primordial dialogue, animated by a rhythmic movement like cells or simple invertebrate organisms.

More precisely, these forms of which the installation is composed are inspired by the theory of panspermia, which is aimed at meteorites or even, to a certain extent, stromatolites. These are so-called living rocks on the surface or inside which bacteria or amino acids can be found from which simple life forms can arise. I am creating a way in which these life forms begin to communicate with each other through gestures activated by levers, joints and rhythms in order to connect and evolve. This “evolution” is actually a paradox that reminds viewers of the complexity of simple things. We often tend to neglect them, disregard the connection with nature, forget that we are part of it, because we do not fully understand it, even though we follow clear existential cycles that we cannot change. Through synthesis, I believe we can find answers to absolutely all questions, but first we must consummate this beautiful stage in which we find ourselves at the moment.

Visually and technically, these abstract shapes that communicate and transmit their movement are made of metal (2.3mm thick sheet metal), a stable material with variable dimensions (approximately 2-3m x 1-2m).  The entire installation will not exceed 10cm in thickness, including the movable parts attached.  The movement is electromechanical, slow, triggered in the presence of passers-by by means of a motion sensor. The transmission of the rotational movement of the motor in oscillating motion is by means of levers, possibly cables and mechanical joints.

The proposed colour is red, but it remains flexible, depending on the architects’ preferences and advice, with the proviso that the monochrome will preserve the integrity of the whole installation and the elegance of the building.

This website uses cookies to improve your experience. We'll assume you're ok with this, but you can opt-out if you wish. ACCEPT Read More
GDPR